Today mobile apps are the way of life as they have become an integral part of everyone’s lives today, be it in the arena of hospitality, shopping, taxi-booking, lifestyle, beauty services, or just anything. People prefer to book most services via the mobile apps, hence it is pretty obvious that the companies that have integrated this technology are considered to have made a wise move and there are many who are contemplating on getting an app for their business.

However, what needs to be pondered upon is that “does every app that is launched in the app market or app store, become a hit?” Well, certainly the answer is no, as every day thousands of apps are launched in the app store, but just a few manage to catch the right nerve of the audience. The competition is massive and in this rat race, only a few survive.

Now, there could be many reasons that lead to the success or failure of the mobile apps, however, in this blog, we will be discussing how ‘Subscription-based mobile apps’ could be your key to success if you are intending that your app stays for long in your users’ mobiles and successfully wins their hearts.

Yes, longer engagement of your users with the app is just what is required. It is vital that apps live long on their mobile devices in order for them to turn lucrative for the app publishers. This is the reason that the ‘Subscription business model’ is need of the hour in order to make consistent & recurring revenue. Yes, there is a shift in how the app business earlier worked. Whilst earlier the app publishers & developers charged a one-time fee from the users, now they have shifted towards charging the audience a recurring fee.

For instance, we have many successful examples in the regard, in the form of Hulu, Tencent Video, YouKu, & Netflix, which are all subscription-based mobile apps and have garnered immense popularity in recent times.

Significant reasons behind the conversions

As per Google’s insights, there is 78 percent of the subscribers who first begin with free app version and it’s only later than they subscribe. Now, when trying an app for free, offers this chance to users to try new mobile apps. So in order to ensure that your users do convert, ensure to have good and quality content in subscription version and be consistent in this aspect. Research initiated by Google, tells that there were three major reasons why users converted from the free trial of app usage to monthly /quarterly/yearly subscriptions basis. So, they were: 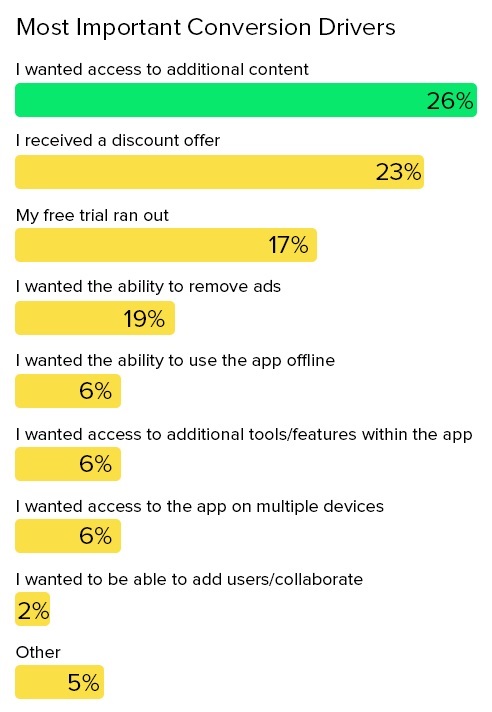 So, these are three key reasons why users convert to the subscription model. Now, let’s move to next.

What strategies can make the app users opt for the subscription model?

There is a research which took place recently and it offered insights to app developers over how to make your users go for the subscription model over the free model. It reveals:

Apple is known to make the most of the present trends and hence it was not surprising on its part to see it introduce a big change in the app store in the year 2017 when it emphasized the app subscription business models over the others. From the earlier standard revenue split of 70/30 for a subscription to its developers, it gave an 85/15 split and with this move, it made it evident to everyone that the firm is rewarding the developers for keeping the customers for a longer time.

Subscription based apps are more rewarding and as they are making more revenue on each user. According to a study conducted by VisionMobile, subscription-based mobile apps earned two-three times more each user as compared to apps which based on a pay-to-download or advertising model. Meanwhile, the subscription model apps also earn around 50 percent more as compared to apps relying on the in-app purchases for revenue.

Apps with Subscription-based model succeed in engaging the audience more

Yes, it is yet another attractive benefit of subscription-based app models as they are able to keep the audience more engaged. After all, everyone struggling with keeping their users engaged would understand how challenging it is to maintain app engagement. However, apps based on subscription models find it way easier as here the users are actively engaged with the app, hence they get most of the app.

Now imagine that you are offered a free version of this same premium app, won’t you just download the one you are getting for free? Of course, you will, right? Same way, won’t your users like this money-saving offer, after all, everyone likes a good bargain and so do your users. Hence, make the most of this. So, when you are listing subscription levels for your app, show your users that they can save money by going for a particular subscription. Being straightforward can be good for your business here, for instance:

Basic Level: For casual users, it is advised that they go for a basic level, as it is presumed that they don’t use all of the features. Hence, purchase the basic model as you still get the right amount of features with this and save some money too.

Pro Level: Daily app users are advised to use pro level as it offers complete access to all of the app features and you will be able to save money in the long run as well.

This way, casual users would stick to the free version while the power users would be encouraged to invest in the subscription model.

Now that you have made the decision to create a subscription-based app, ensure that the app offers unique and useful content and features that are able to keep the users glued to it. When users are paying for monthly, quarterly or annual subscription, they expect the app to offer a lot more than a one-off app payment. When users get to access new and fresh content and easy yet amazing features every day, they are certain to stick with your app.

Besides, personalization is yet another factor that is crucial for user satisfaction with your app. This feature allows you to understand your user so that appropriate content can be provided to them. Also, send emails and push notifications to your users whenever new app updates are available.

When a user is using a freemium model and he is moved to the subscription-based model, ensure that this user is notified of the app, via in-app messaging or other communication means. After all, conversing them without prior notification can get you negative app reviews, which you surely won’t like, so move with caution!

The best way is, to be honest. Notify your users via push notification, email, or in-app messaging about your intention for the switch. Like, you can inform them that the subscription model offers exclusive features. Just show them that with this move you are simply trying to enhance the user experience.

For most app users their user base expands to multiple countries and thus they have to fix territory-specific prices because 3 dollars is the United States hugely differs from Vietnamese 3 dollars. However, prior, to begin with, territory-specific price setting, it is advised to execute market research. Like, users from age-group 18-24, how much is that they can willingly pay? Will students from North American would be really looking forward to spending 7.99 dollars on an app subscription? Also, find about what your competitors in the market are offering as that would be a useful reference point. In case you are not receiving an expected response to a subscription from a particular market, you can lower price at any given point.

How does the app stores respond to the subscription-based phenomenon?

So, most app stores run this auto-renew subscription, as we experience with Prime and Netflix. Users are notified as their subscription nears an end and when it’s time to renew the subscription. Now in the case with Apple’s app store, the revenue split here is in the favor of the developer. It is 70/30 in the first year of subscription, where developers get 70% & Apple gets 30 percent. Then the percent share changes to 85/15 as it is renewed in the second year. In the case of Google’s Google Play, it goes like 85/15 split from the very first year only. Manual and automated options can also be offered by the app publishers for the subscription renewals as well.

Final Word: it is pretty evident by now that the app publishers who go for the subscription-based revenue model would generate more profit as they would have the opportunity to increase ARPU (which is Average Revenue Per User) by billing the app users on a recurring note.

If you would like to discuss a more On-demand Subscription-based revenue model, our mobile app development experts at Octal Info Solution are ready to help you. You can reach them at the following email.