At the time when ‘free-to-play’ market is failing to garner eyeballs owing to gamers’ reluctance to the use of in-app payment, the world of mobile games is still ruling the chart. Here we are presenting a list of top ten android games that ruled in 2015. It comprises of free and paid for games as well as in-app payments. 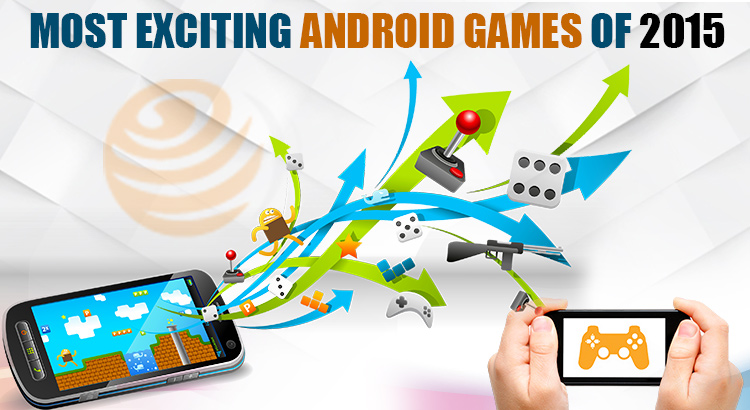 It’s every bit of an adventure ride with similarity to Temple Run. This Lara Croft: Relic Run has Lara running incessantly through a procedurally-generated world. In fact, Tomb Raider fans are surely going to fall for this game where players can expect similar gameplay to other endless runners. Coming to Lara, she is hands-down the most alluring endless runner character ever who can also parkour, shoot guns, run along walls and slide down the back of a tyrannosaurus rex.
Download Now

This mobile classic Canabalt is all about speed – the thrill of being barely in control, and presenting the player only the simplest controls of survival. However, ALONE is a step ahead that takes that basic premise and straps a rocket booster to it.
There is no leaping between buildings, as you’re flying through deadly caverns, a single digit nudging your tiny craft up and down. During the process, there are warnings about incoming projectiles; your ship surviving minor collisions and slowly regenerating. However, it persistently demands pressure of simply staying alive and not slamming into a wall.
Download Now

Framed is one game that utilizes the benefits of touchscreen devices to the fullest as here, it’s flinging you headlong into an animated comic of sorts. You get to improve the fortunes of a spy, fleeing from the cops. Panels are dragged about and rotated while the new ideas developing consistently, including you having to carefully shift scenes on the page at exactly the right moment. This is a stylish and finite affair that makes you crave for more.
Download Now

While developing Angry Birds franchise, developer Rovio presented a lot of aggressive whoring of the birds, however, that has changed with this space-based fork of the simplistic physics games series. You come across some new play concepts, with the planet-based levels requiring different tactics.
Download Now

With an ‘indie’ vibe, Badland is all about a weird, dark and gloomy world, in which you fly about in control of a… blob thing. Your blob gets bigger and smaller, splits into loads of mini clones, and generally baffles you about what might lie around the next corner. It’s absolutely worth a try!
Download Now

Prune is certainly apart from everything that you ever came across- from gaming perspective. It evolves from an experimental tree-generation scrip and it makes you swipe to shape and grow a plant towards sunlight by tactically cutting off specific branches. No matter how easy it may sound, but in Prune, the trees, shrubs and weeds don’t hang around. As they’re growing at speed, you find yourself faced with poisonous red orbs to avoid, or structures that damage fragile branches, you’ll be swiping in a frantic race towards sunlight. One dodgy swipe from a sausage finger, and you see your carefully managed plant very suddenly find itself being sliced in two.
Download Now

This appealing game is based around the weird sort of geometric shapes popularised by artist M. C. Escher, with its colorful maps bending and rotating in ways that appear to challenge the laws of nature. Though it’s a short game with only 10 multi-layered levels, still, it’s every bit of a joyful ride.
Download Now

Also called as a “multidirectional shoot them up”, this PewPew is a superb shooter with some bizarre game modes and controls that work exceptionally well on touch devices.
Download Now

Latest in Gameloft’s mobile homage to grown-up home console FPS franchises, here you place the gun about the place alone or in online multiplayer matches. It offers everything in a one-off install here, instead of packing it with in-app purchases.
Download Now

This is undoubtedly an extremely addictive card game from the makers of World of Warcraft. Here you build decks from won or purchased cards to then battle against friends and strangers. You need a scrupulous strategy as you play as well as enjoy without paying a penny. However, you can buy booster packs and add-on quests lest you want to.
Download Now